Back before back-in-the-day, when I was a mere twig of a girl proud to be wearing jodphurs, I was full of aspirations.  Of course, I wanted to go to the Olympics (what serious young rider doesn’t?).  But there was something else I wanted even more.

I wanted good hands.  Because I knew that I wouldn’t be a good rider until I got them.

Good hands.  In those days, it was a phrase everyone knew and everyone used.  It was a universal truth that good riders had good hands. Riders were complimented on their good hands and criticized for their bad hands.  Educated hands were expected of advanced riders, and admired.

If there were an equine dictionary a la the OED, all those phrases — good hands and bad hands and educated hands — would now be listed as archaic.

When I hear about contact issues or a rider needing to improve his contact, and I see a horse being jabbed in the mouth or yanked with an outside rein in a misguided half-halt or being turned into a boat for a rider waterskiing on his mouth, it makes me want to pull my hair out.

But there is a glimmer of light in the corridor of equestrian darkness.  I recently heard that USDF judges are becoming more forthright in their assessment of rider’s hands.  One popular phrase to put in the test remarks now is “rider restricted.”  Okay, that’s a step in the right direction, but it’s almost as oblique as contact.

At this point, if you’ve stuck with me, you’re probably getting tired of hearing me complain.  So let me offer some practical solutions to riders and instructors, which I believe can help fix the problem.

END_OF_DOCUMENT_TOKEN_TO_BE_REPLACED

In the French language, Fauve may be translated as “wild beast.”  It was the critic Louis Vauxcelles who first coined the term in reference to Henri Matisse and Andre Dérain, after seeing an exhibition of their work at the Salon d’Automne in Paris.

Characterized by a spontaneous expression, with bold and unmasked brushstrokes, and vivid colors direct from the tube, the works of the Fauve movement capture nature with emotion and joy.

So it is with this work of Wassily Kandinsky, entitled “Improvisation III.”  Is there a beast who inspires more emotion and joy than a horse?  I’m biased, I admit, but I don’t think so.

END_OF_DOCUMENT_TOKEN_TO_BE_REPLACED

We know the eternal riddle as “which came first – the chicken or the egg?”  But when you’re giving a lesson to horse and rider, there’s a question that’s more important, which is “who comes first – the horse or the rider?”

Most instructors address themselves exclusively to the rider, every lesson.  Some tell their riders to make the horse do something, but don’t explain how. Some make improvements in the rider’s position that in turn improve the horse’s way of going.  Some focus on exercises or gymnastics, as part of a set program of instruction.

Rare is the instructor who focuses attention on the horse first, not simply as an athlete but also as an individual.  I’m sure you’ve heard instructors say, “the horse comes first,” but the phrase usually refers to the horse’s welfare (and it’s too often said but not meant, just like those electoral promises).  I agree that the horse’s welfare should come first, but I also think that focusing attention on the horse first, as an individual, can improve the horse’s performance.

After all, what is the essence of a great performance under saddle?  It’s the partnership between horse and rider.  And a great partnership isn’t based on selfishness. It’s not based on using; it’s based on giving.  I’ll admit, it’s hard to give the horse something that he or she rarely gets, which is to come first. But the payoff can be huge.

END_OF_DOCUMENT_TOKEN_TO_BE_REPLACED

For those of us who have passed the half century mark, the word “Rolfing™” conjures up some strange amalgam of hippie happiness and sacrificial torture.

No wonder, because this form of bodywork was christened at Esalen, the legendary consciousness-expanding center in Big Sur.  And in the early years, people who got Rolfed™ talked a lot about how much it hurt.

Biochemist Ida Rolf developed the technique of Rolfing™, and named it after herself.  Some say it all started with a horse.  Ida had been kicked by a horse and afterwards suffered symptoms of acute pneumonia.  Her symptoms were relieved not by drugs but by bodywork.  She figured out how to heal herself and others.

The first person I met who had been “Rolfed™” told me it “hurt like hell” but he loved it.  I always suspected that he was more than a little bent, so this didn’t make Rolfing™ any more attractive to me.  I had no need for it, no interest in it and no desire to experience it.  That was back in the 80s.

Fast forward twenty years, when serious back problems started keeping me out of the saddle.  My body didn’t work the way it used to. I was crooked and stiff and slow and every jarring motion sent a small shock wave up my spine.  I got a sheepskin seat saver.  But I had lost my seat.

END_OF_DOCUMENT_TOKEN_TO_BE_REPLACED

Time for another happy dance!

The belly button may be the most neglected part of the rider’s anatomy.  Too bad it has that silly name, or riders would probably talk about it more.

Luckily, Shannon Peters does (and I owe all my knowledge of riding with your belly button to her).  One day, I watched her teach a student who was having trouble bending her horse, both getting tighter and tighter as they struggled together.  Shannon suggested that the rider point her belly button where she wanted her horse to go and voila! — what was once hard was now easy.  The rider became softer and the horse bent easily.

Could it be that simple?  Yes.  If we’re not afraid to talk about belly buttons.

As instructors, our primary tool is language.  Of course, we’re happy to demonstrate what we’re talking about on a horse, or stand in front of a jump to prove to a rider that they can stop straight and quickly once they’re over it, or hold the reins from the ground to help a rider develop feel, but it’s most often what we say and how we say it that helps our riders ride better.

Denny Emerson said it perfectly today on his Facebook page — “The litmus test is in the individual ability to know what is valid, and the ability to transmit that validity in a way that others can discern it.”

That’s why talking about belly buttons is magic.  Telling riders to point their belly buttons where they want to go is actually no different than instructing students on “the spiral seat.”  Unfortunately, like the half halt, “the spiral seat” is a dungeon of confusion.  As a phrase, it makes no sense.  It sounds convoluted and no one understands it.  You can try explaining the twist in the torso that defines the spiral seat but why bother when you have a belly button?

END_OF_DOCUMENT_TOKEN_TO_BE_REPLACED

Let’s leave for a later post the question of what straight actually means, since straightness varies depending on the level of education of horse (and rider). For today, let’s stay with the basic working definition of a “straight horse” — a horse that moves without favoring one side (or one direction) or another. 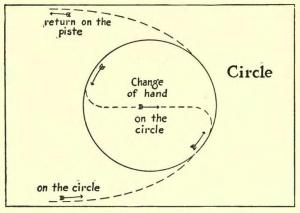 Depending on the bend in our horse’s body, most of us can easily identify which direction is our horse’s “good direction.”

We start working on making the “bad direction” as good as the “good direction” by riding our horses along curved lines — in circles, serpentines, bending lines, shallow loops, etc.

Most of us are also taught that the best way to bend our horses is with diagonal aids — the oft-repeated “inside leg to outside rein.”  While this orchestration of aids is extremely effective, it requires knowledge on the part of the horse, and independent aids on the part of the rider.  This is part of the reason it so often fails.

END_OF_DOCUMENT_TOKEN_TO_BE_REPLACED

If I say “no horse is perfect,” I won’t be surprised to hear that I’m wrong, and that one of my readers has a horse who is perfect.

That’s because one of the things I believe is that once you believe you know everything there is to know about horses, you will make the mistake of making a blanket statement that applies to all horses, and then one horse will come along and prove you wrong.

So let me say instead, “no horse is perfect but there may be the exception that proves the rule.”  In fact, I’d love to meet that exception.

Until that time comes, I don’t expect perfection.  In fact, I expect problems. Especially trailer loading problems. They’re as common as high-fructose corn syrup in processed food and just as troublesome.

I’ve worked with horses who were in trailers that blew apart while traveling…who thought it was more fun to play than to load…who would rather lie down and die than put a hoof on a ramp…and who were allowed to decide if they wanted to get on or would rather not.

I learned the Monty Roberts way, and use the dually halter with a lunge line or long-line for horses who need to re-learn how to load.  The pressure-release method usually works, and once you get a feel for how much pressure you need and when to release the pressure, you can turn most problem loaders around.  It’s not that difficult, and it’s easy to pass along the skills needed, so once you’ve fixed the horse, you can help the owner to keep the horse fixed.

Unfortunately, the pressure-release method didn’t work with the most recent horse I had to retrain to load, who spent nearly two weeks with a well-known Monty Roberts protege, working on loading.  When it was time for him to go home, he still needed three people and two longlines to get him on the trailer.

END_OF_DOCUMENT_TOKEN_TO_BE_REPLACED

Right now, there’s a very active thread in the dressage forum on the Chronicle of the Horse bulletin board.  Thirty-seven pages have been filled in the last six days by dozens of posters.

It’s all in response to a blog post by Catherine Haddad Staller, also on the Chronicle of the Horse, entitled “It’s Time To Train the Trainers.”  When I read it, I thought the message was clear:  riders are deficient in the basics, and that’s the fault of the trainers.

There wasn’t a lot of middle ground.  Catherine has strong opinions and a somewhat brash delivery.  I find her blog amusing even when I disagree with her.  I have a feeling that we could sit down over coffee and hash it out and still smile at the end.  I understand the sense of humor that could lead her to write a sentence like this:

“These people are trying like hell to learn the most basic principles of riding and are struggling along at the pace of a rabid garden snail.”

Marching along as only a snail can, rabid or not.

One poster on the bb, who happens to be a vet, pointed out that since snails are mollusks, they don’t get rabies, but that’s beside the point.  The point is that it’s sometimes hard to hear what people have to say because of the way they say it.