Potential demo riders jumped through flaming hoops for the chance to ride with Kyra.  Well, not literally, although it would be refreshing, wouldn’t it, to see some of those dressage pairs jumping through flaming hoops, like in the circus? There should be some form of rebalancing (half-halting) the current vogue of requiring that everyone walk on tippy toes beside the dressage arena so horses and their riders don’t lose focus during a test.  A test that allegedly tests, in part, the extent to which a horse is on the aids.

But I digress.  Back to the flaming hoops simulation.  Potential demo riders first submitted applications and video back in August.  Out of the seventy applications received, sixteen semi-finalists were chosen in early October. The day before the symposium, those semi-finalists arrived at Hadley Farm at the University of Massachusetts to ride in front of Kyra.  Nine riders were accepted, and the other seven drove their trailers home.  I’d venture a guess that some of those riders were among the hundreds of thousands of New Englanders without power.  I volunteered at the registration desk, and I was one of many volunteers without power at home.

At the symposium, the emphasis was on riders competing at the upper levels. In fact, one participant was listed as “almost Grand Prix.”

And what did Kyra have the rider on the “almost Grand Prix” horse do?  Shorten her stirrups!  And hold a whip in both hands as she rode!  No kidding! And the rider given this Pony Club treatment is someone who is known for having an exemplary seat and for being one of the most elegant riders currently on horseback.

Was Kyra right?  Of course, she was.  And kudos to her for being secure enough as a trainer to go back to basics to refine the aids of even the most experienced and talented riders in our region.

Although she doesn’t market herself as a biomechanics expert, Kyra’s teaching seldom strays from its focus on the seat. She believes that if the hip angle is too open, the seat will suffer and the horse will not have the assistance it needs.  Therefore, up go the stirrups.

As she adjusted her own stirrups, sitting on one the participant’s horses, she addressed the audience, making the point that the proper way to raise your stirrups is with your foot in the stirrup.  She said it’s important because you don’t want to fall off…because anything can happen when you’re sitting on any horse.  Back to basics!

Kyra went back to basics again when she told not one, but two advanced riders to hold a whip horizontally in both hands while riding, with thumbs up and over the whip.  While this isn’t an unusual technique for the novice rider learning to keep his hands level, it was unusual to see the technique used with riders on horses in double bridles!  Since Kyra rides with a Fillis hold, her lesson had a dual purpose — to level the hands and to keep the thumbs up. 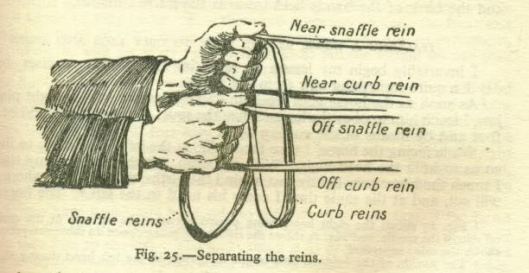 Kyra emphasized that she looked for an even contact on the inside and outside reins in order to help the horse achieve straightness.  Back to basics again. And wonderful to hear in this day and age, when so many riders (and horses) are taught to rely so heavily on the outside rein that the feel of the bit is lost, not only in the rider’s hand but also in the horse’s mouth.

The riders in Kyra’s symposium who had a whip in their hands were able to recognize, swiftly and without question, when their hands were straying from their proper positions.  One of the hardest things to do is change our habits as riders, especially when those habits have taken us to Gladstone.  Kyra’s whip exercise accomplished just that.

Just a few weeks ago, I employed this same basic exercise with one of my young riders and it helped her reduce her reliance on the inside rein.  All it took was one ride, and the improvement in her hands remained.  Another nice thing about this exercise is that it’s one you can do yourself, any time you want to recalibrate your own hands.

What do all of Kyra’s back to basics exercises have in common?  They help develop feel.  Perhaps the hardest of all things to teach.  Especially if you forget the basics.

2 thoughts on “Notes & quotes from a clinic junkie: Kyra Kyrkland”