I realize that I’ve been lax in reporting on Anne Kursinski’s clinic at this year’s Equine Affaire in Massachusetts, which I promised you.

Anne is a fan of the forward seat — the traditional hunt seat that boasts lightness as its hallmark.  Position is primary.  As she says,

“If you can’t feel your own body, good luck feeling what your horse is doing.”

What does Anne look for in the forward seat she teaches?  Lightness and balance.  And a straight line from the rider’s elbow to the horse’s mouth.  This line continues over fences with the automatic release. 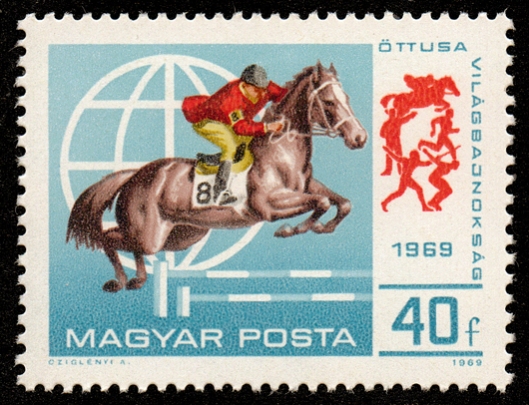 The automatic release on a Hungarian stamp

Why is Anne such a fan of the automatic release? Because it allows you to apply your rein aids while going over the fence, instead of waiting to re-establish contact after you’re over the fence (which is often too late, and not just for eventers).

Zara Phillips turning Glenbuck over a fence at Badminton 2008

When I was learning how to jump, we were taught our releases progressively, from beginner through intermediate to advanced:

2.  Rest hands on top of the horse’s neck (the crest) without grabbing mane

3.  Rest one hand on top of the crest and rest the other on the side of the horse’s neck

I wish I’d been taught the automatic release by Anne instead.  Her method is much simpler, more effective and a lot quicker.  I’m not going to try to teach it to you her way, because she does a much better job in her book Anne Kursinski’s Riding and Jumping Clinic.  I bought a copy of the book when it came out, lent it to a friend who lost it, and bought myself another copy. That’s how good it is.  And it just came out in paperback.

As we might expect from Anne, it’s a thorough, progressive guide to learning how to ride.  Everything is covered.  Excellence is expected.  Canter-halt?  It’s in there.  As it should be.

But back to the clinic.

While I was cheered to hear Anne keep alive the foundations of the forward seat, I found it sad to watch riders attempting to master the automatic release years past the point where they should have been taught this advanced release by someone….anyone…it didn’t have to be Anne.

Who’s to blame?  Not the riders.  The trainers who abort their training at the crest release and the judges who reward jumping ahead instead of penalizing it.  Hand-in-glove, the persistence of the crest release encourages jumping ahead as the rider’s balance in the saddle is never truly tested.  How can it be when the rider relies on the horse’s neck for balance?

The crest release takes the aid out of “rein aid.”  Our hands, through the rein aids, are supposed to have feel and they are supposed to communicate with the horse.  Hands in a fist, with knuckles buried on the horse’s neck can be neither sensitive nor communicative.  The fingers of a soft fist and hands in contact with the horse’s mouth have the chance to say so much more, and so much more sensitively.  And that’s the real problem with the crest release.