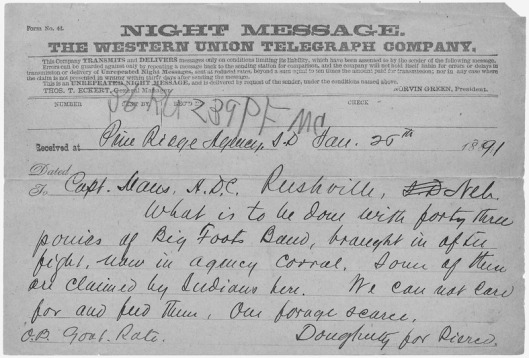 This “night message” was sent 121 years ago on this day, following the massacre at Wounded Knee in South Dakota.  Sioux Chief Big Foot was killed in the slaughter that marked the last great conflict in the Native American wars.

This eyewitness account appears in the book Black Elk Speaks (1932):

“I did not know then how much was ended. When I look back now from this high hill of my old age, I can still see the butchered women and children lying heaped and scattered all along the crooked gulch as plain as when I saw them with eyes young. And I can see that something else died there in the bloody mud, and was buried in the blizzard. A people’s dream died there. It was a beautiful dream . . . . the nation’s hoop is broken and scattered. There is no center any longer, and the sacred tree is dead.”

But what of the ponies?

The telegraph whose image I’ve copied above asks:

“What is to be done with forty three ponies of Big Foot’s band, brought in after fight, now in agency corral.  Some of them are claimed by Indians here.  We can not care for and feed them.  Our forage is scarce.”

What a poignant reminder that the heartbreak of horses without enough to eat has always touched all of us.

How painful it must have been for Native Americans to have their horses taken away from them, not only because it was an attempt to disarm them of their freedom, but because they were animals “seen” in their own people — people with names like Spotted Horse, American Horse, White Horse, and Young Man Afraid of His Horses (all real members of the Sioux tribe).

Today, I fear, there would be many more babies named Woman Afraid of Her Horse, were we not naming our babies Sophia, Emma or Isabella (the top three girls’ names of 2011).

A long-lost friend of mine was a Native American, an Iroquois, and she told me she was a bear.  If you knew her, you could see the bear in her.  She told me that when a child was born, the elders could see the animal in the child, and that was when the child received his or her animal name.  How lucky, I think, for any child to have been named a horse.

1 thought on “The ponies of Wounded Knee”