I’m not sure why, but it’s looking like nostalgia week here on the blog.

It’s been a long time — 34 years to be exact — since horses dove into the water at the Steel Pier in Atlantic City, New Jersey.  And now the diving horse is set to return this summer. 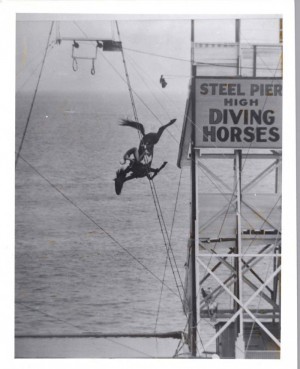 The original act began in 1913 when Lorena (or Leonora) Carver became the first woman to dive off a platform into water on the back of a horse.

Lorena’s father, William F. “Doc” Carver, a show partner of “Buffalo Bill” Cody, invented the diving horse act in 1881.  What inspired him? He was riding across a wooden bridge when it collapsed and he and his horse fell into Nebraska’s Platte River.

Hotel developer Frank P. Gravatt brought the diving horse act to Atlantic City’s Steel Pier in 1928.  Over the 50 years in which the act was performed, over 19 women donned swimsuits and leapt into the water on the backs of over 14 horses.  The exact number of performers and many of their names, both human and horse, are lost to history.

Although no horses were ever injured during the act, the show took a tragic turn in August of 1931.  Sonora Webster Carver, Doc Carver’s daughter-in-law, hit the water on horseback with her eyes open and was blinded for life. The 1991 Walt Disney movie, Wild Hearts Can’t Be Broken, tells her story.

This year marks the second time the diving horse act has returned to Atlantic City.  The last time was in 1993, when a modified version of the show was put on for two months and then shut down following protests by animal rights activists.  That show featured two ponies, a mule and a dog jumping 15 feet into the water with no riders aboard.

The act that’s scheduled to come to town this summer will be modeled closely after the original act, with riders and horses jumping from a platform 30 to 40 feet in the air (the precise heights of the act through history are debatable — some say the platform was as high as 60 feet in the air).  As a point of comparison, the high diving board in the Olympics is 10 meters or 32.8083 feet high.

Since this is nostalgia week, I’d like to share with you some of things I remember about high dives and Atlantic City...

My mother was a diver, and I remember her telling me about how she loved diving off the high diving board when she was a teenager.   I never saw her dive off anything but a common suburban diving board, but she was as elegant in the air as she was in the water.   I wish I had had a chance to see her dive from that height.

Fade to Atlantic City…when it was still “the boardwalk,” a little seedy and not too crowded, with couples making out underneath it, just like in the song…

I was there, not under the boardwalk but walking on it, when I was eleven and my sister was three.  My parents, who had taken us to Atlantic City for the weekend, had let me out to wander by myself.  I wandered over to a roulette table set up in the sand, with about a dozen people, all adults, standing around it.  A separate table was piled high with stuffed animals, including a four-foot-high, shocking pink Teddy bear.  I wanted to get it for my sister.

So I took my place at the table.  To my left was a man who kept making eye contact with the man spinning the roulette wheel.  I watched as the man by my side put his chip on a number.  And then he removed it.  So I put mine there.  And the wheel spun.  And the man spinning the wheel called my number and I said, “that’s me.”  And his face sank.  And he looked at the man to my left.  And I knew at that moment what a shill was.  And why this one was likely to lose his job.  I carried that big pink Teddy bear back to the hotel and gave it to my sister.  Now her own twelve-year-old daughter has that same Teddy bear in her room.

Reminiscence over…fast forward to today.  Animal rights groups, including The Humane Society of the United States, have come forth in protest of the diving horse act.  The Humane Society calls it “inhumane and potentially abusive,” citing “stress and trauma endured by these animals” and calling it “senseless animal exploitation, for the sake of entertainment and profit.”  Look out, World Equestrian Games, Rolex and the Olympics.

Interestingly, Sue McDonnell, who heads the Equine Behavior Lab at the New Bolton Center at the University of Pennsylvania School of Veterinary Medicine, has a different take on the diving horse.  While acknowledging that the behavior is rare, she has observed semi-wild horses, and young foals in particular, choosing to jump into ponds from inclines of 5-6 feet.  She says “I don’t think anybody has ever studied how high they will voluntarily jump…some horses do actually dive in that they will put their head down, dive, go under water, and come up like a person.”

So there.  And so it remains to be seen whether this act ever gets off the ground.

5 thoughts on “The return of the diving horse”