It takes an embarrassingly long amount of time to find a saddle that fits.  No other proof is needed beyond the time elapsed between this post and the post you’re reading now.

I didn’t just sit on my hay bales in the meantime.  Far from it.  About two hundred feet, in fact, on the chair in front of my computer, emailing saddle fitters and friends for suggestions and advice, and searching for a new saddle through my favorite online sources:  Trumbull Mountain, fineusedsaddles.com, Rick’s Heritage Saddlery, Pelham Saddlery, and, of course, ebay.

The local saddle fitter I’ve been using asked me about my budget (answer:  getting smaller by the minute) and, remembering what I like, suggested a new Kent & Masters (“under $2000, all leather, wool flocked, interchangeable gullet system, simple seat, simple saddle”) that I could try.  I replied that I would never, ever again buy a custom (read: “new”) saddle again.

I reached out to one of my friends, who lives nearby and has bought even more saddles than I have during the years.  She sympathized with me, as she spends at least as much time as I do buying them, selling them, and beginning a new search.  As far as I know, the only saddle she has kept all these years is her Billy Cook.

She had none of her own to sell me (she may still have that Reactor Panel, but knows I like a close contact fit). A friend of hers, though, has a 17.5″ Sommer mono flap with a wide tree that’s for sale.  I could “keep it” and ride in it for as long as I wanted, because her friend was waiting for a new, custom saddle…of course, she might want the Sommer back, if the new saddle didn’t fit.  I understand.

The Sommer Espirit Athens had a lot of what I like in a saddle. Narrow twist.  Mono flap. Medium-width gullet and moderate-size panels.  The saddle boasts half panels, short tree points and Sommer’s signature synthetic “flex tree.”   I wasn’t crazy about the thigh block, even though it was only a 3/4-block, but, hey, nothing’s perfect. Which is exactly what my horse said when I put the saddle on his back.  Not perfect!  I had to agree with him.  The concept was great, but those half-panels put a lot of responsibility on his shoulders (or right behind them).

Time to move on.  If I had wither tracings, it would cut down on my time and expense trying to figure out what saddles might fit.  So I cut a paper grocery bag flat, got out my flexicurve and Sharpie and went to the barn with a friend. Then, I attempted to have my horse stand square.  He can halt square under saddle, but he sees absolutely no point in halting square when I’m not on him. What’s the point?  I had to agree with him, except for the fact that I was trying to find a new saddle for him.  I already have several that I like for me. Finally, in desperation, I pulled his tail and he squared up.  Why did it take me so long to think of that?  Put it down on the list of training holes to fill…right after I find that new saddle.

On to ebay!  Where, thanks to used saddle dealers looking for wider exposure, there are many used saddles available with 7-day trial periods.  After looking at all the 17″ and 17.5″ wides (and there are dozens of them), what did I find?  A Macel.  Never heard of a Macel?  Neither had I.  But I loved the looks of it.  Narrow twist…monoflap…you get the idea.  I googled it. There were several threads on the dressage bulletin boards regarding this obscure French saddle, and I now know that there is an eventing trainer in California that wants all his students to ride in one.  I also know that there is one dealer in the UK but none on this side of the ocean.  I also know that the one on ebay is the only one you can find for sale no matter how many google search results you scan. 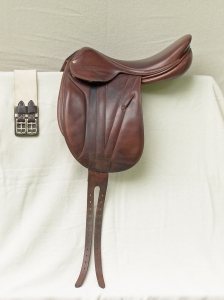 Butet – the one I should never have sold

In the listing, the seller said that the tree was adjustable, but the dealer in the UK listed different tree widths. Hmmm…I inquired and was told that the points were adjustable.  Right.  But the saddle was listed as a wide, so I made an offer and bought it, along with seven days to see if it worked.  When I unpacked the box, my Yankee-Irish horse whispering boyfriend pointed to the bumps that were exactly where the tree points were (and which later dug into my thighs when I sat in it).  It all made sense now. Aside from the bumps, I loved everything about it.  Narrow twist…monoflap…you get the idea.  It reminded me of my long-lost Butet dressage.  It looked just like the saddle that Philippe Karl rides in on his DVDs.  If it fit, I might have to revisit my ban against buying a new saddle.  I brought it to the barn and put it on my horse’s back.  Without girthing it up, I ran my hands flat against his back, with my knuckles running across the panels.  It bridged.  So back it went and I didn’t have to wonder how I was going to be able to afford a new Macel or wait for one to be made in France (even though August is a long way off).

Vintage Passier Baum – the way to a good seat

The search continued.  But in a world filled with overstuffed, over-blocked, overly-wide gulleted, overly-deep-seated dressage saddles, it’s hard to find a saddle that lets you feel your horse and move your body an inch.  Yes, you can buy an old Passier, and have the tree adjusted (only not by anyone at any time).  Or you can buy an old Kieffer. Or you can look for some other brand of older, minimalist saddle….and you’ll find that most of them have narrow or medium trees (the Niedersuss is an exception, because their mediums fit like medium-wides), and you have to look closely at the gullet to make sure it’s wide enough.  What would my warmblood say? Next!

And next it was.  One Frank Baines Reflex on the way (no used Caprioles available), a Black Country Eden in the wings and a Tad Coffin in transit.  The Frank Baines was the opposite of a close contact saddle in a lot of ways and the twist was wide.  It also perched, indicating that the wide tree wasn’t wide enough. I had high hopes for the Tad Coffin.  Tad makes my favorite jumping saddle. Years ago, I bought a Butet instead (which I liked nearly as much) because after trying to get his saddle to fit with pads, Tad told me I had one of those rare horses that his saddle never fit — a Thoroughbred with real withers that took a medium tree but had huge shoulders.

I prayed as I drove to the barn with the Tad in the passenger seat.  It was almost everything I wanted in a saddle (it’s not a mono flap).  It even had a 15.75″ flap.  When I put it on my horse’s back, it was perfection.  In fact, I’ve never seen a saddle fit any horse as perfectly as this one does.  It’s exactly like a Tad jumping saddle, but with a straight dressage flap.  Tad only made dressage saddles for a few years, and some were black.  This one is brown (which as you know, is the new black).  I am so lucky.  And so is my horse. And I don’t want to hear another word from him about saddles until he learns how to piaffe. 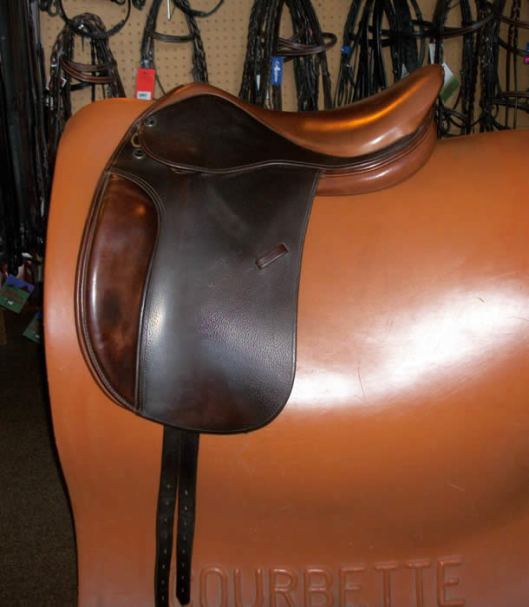