Gervase Markham’s book Cavelarice, or The English Horseman: containing all the Arte of Horse-manship was published in 1607.  For those interested in obtaining a copy, they do come up from time to time.  A first edition of this rare and important work sold under the hammer at Christie’s in London, South Kensington a few years ago for $3107. 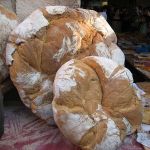 The author was the Martha Stewart of his day.  He was a trainer of hunting and racing horses, he enjoyed baking, and he published his recipes in several books on country life.  He had this to say about horse bread:

“First therefore you shall understand that the principal food whereupon a running horse is to be fed most; as the very strength and chief substance of his life must be bread, for it is of all other foods most strong, clean, healthful, of best digesting, and breed the best blood.”

This was a century before the Darley Arabian, Byerly Turk and Godolphin Barb served as the foundation sires for the English Thoroughbred.  For those interested in reading more of this fascinating history, particularly the role of the Spanish horse traditionally referred to as the Godolphin Arabian, I recommend Sylvia Loch’s The Royal Horses of Europe.

As we look to the past, it is important to bear in mind that wheat was quite different in Markham’s time than it is today.  You can find a brief history of wheat here.  The wheat in common horse bread was unleavened and supplemented with peas and beans, while Markham’s horse bread for elite racing stock was leavened.  Breads were thought to be not merely nutritional but also medicinal, for horses and humans, and one looked to the manure (or the stool) to verify the recipe and its efficacy. 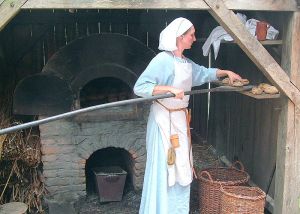 As a baker, Markham’s experimental kitchen was the stable.  His “common baker’s horse-bread” appeared in the 1616 edition of Markham’s Maison Rustique, a compendium on country life.  His leavened breads found such favor there that some years later, he penned The English Housewife (how’s that for getting around?), wherein he contributed further recipes for breads — this time for table rather than stable.

I’m not sure how horse bread has eluded Martha all these years, especially now that she keeps Friesians at her home in Bedford, NY, but it’s probably only a matter of time.  Perhaps, as she is alleged to have done with Fannie Farmer, Martha will simply “adapt” one of Markham’s recipes.  Like this one:

“…take a strike (about a bushel) of beans and two pecks of wheat and one pecke of rye, grind these together, sift them and knead them with water and barme, and so bake them thorowlie in great loaves, as a pecke in a loaf: and after they are a day olde at the least, your horse can feed on them, but not before…common baker’s horse-bread, that is made of branne and wheate chyssel (rough coarse meal with lots of bran and twiggy bits…barely fit for animal food in the 16th)…”

One wonders (or at least I do) how much healthier a loaf might be than the pelleted and texturized grains we feed today, from manufacturers that formulate their recipes in large part based on current commodity prices. Those “wheat middlings” you’ll find on the tag on your feed bag are akin, I imagine, to the “wheate chyssel” that Markham condemns in the recipe above.

In a late 19th century edition, The Oxford English Dictionary contained an entry for “horse bread” that informed the reader that it was “still in use in many parts of Europe.”  Knowing as we do the dangers of sugar (sweet feed), the contamination of our food supply in general, and that the horse’s stomach doesn’t appreciate a change in the menu (ignored by those who persist in the antiquated habit of feeding bran mashes once a week), perhaps horse bread is ready for a comeback. 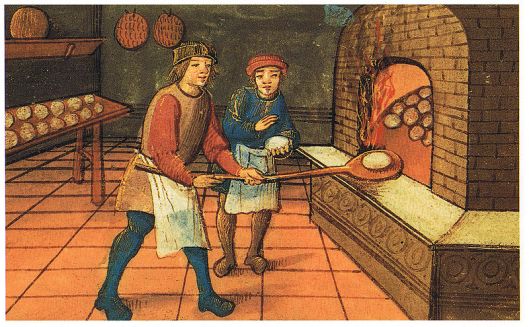 Right now, someone can get a jump on Martha.  I’m a cook, not a baker, so it won’t be me.  Artisan horse bread, anyone?  If it could help win ribbons, I imagine it wouldn’t matter what it cost to those who would buy it.  Some things never change.