That’s what I’ve been wondering ever since I read a review of Chris Mooney’s new book, The Republican Brain:  The Science of Why They Deny Science — and Reality.  Now, before you get in a tizzy over the subtitle, take a deep breath and think about horses grazing in a field.

There, that’s better, isn’t it?

If you’re a Conservative, you can relax, because despite the title of Mooney’s book, it looks like you and your horse are on the same page.  At least when it comes to amygdalas.

In case you didn’t know, the amydgala is where “the fight or flight reflex” is housed.  And while I can’t tell you how the relative size of the equine amygdala compares to ours (can someone enlighten me?), I can tell you that the equine amygdala as a percentage of cerebral volume is higher than that of a cow or a pig. 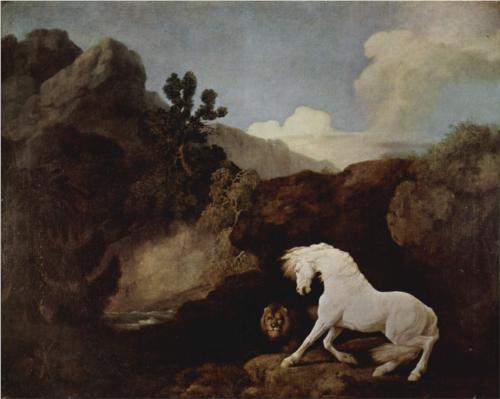 Horse Frightened by a Lion by George Stubbs, 1770

Drawing on neuroscience, linguistics and experimental psychology, author Mooney informs his readers that the tolerance of ambiguity and an urge to cogitate are core Liberal traits, while resistance to change and a need for closure are core Conservative traits.  Which sounds more like your horse?

If you’re a Conservative, sharing a larger amygdala with your horse will probably make you feel even closer, and you can rekindle a kinship with all equines in good faith.  If you’re a Liberal, your heart is probably bleeding for all the horses who are mistreated and misunderstood, and you may even be hoping that your horse, no matter how set in his ways he is, will change the way he thinks and behaves if you work hard enough at it (and you’re probably right on that count).

Politics aside, what’s most intriguing to me is the brain science here.  It bodes well as a line of inquiry for the future, but I think if we want to make real progress, our focus should shift from the human brain to the equine brain.

When we discover where tolerance resides in the horse’s brain — and we know it’s in there because look at what they tolerate from us — I won’t be surprised to hear that the area is larger in size, on a relative basis, than it is in our own brains.  Until then, we can at least try to model ourselves after our four-legged friends in the barn.

5 thoughts on “Are horses Conservatives?”