Lady Godiva, eat your heart out.

SirPaul released this album two days ago.  For those who love dance music, clubbing and horses, it’s a winning Trifecta.

The song “Ride” could be an anthem for all of us who think the best place in the world to be is on the back of a horse.  I’ve already been dancing to the song “Like a Horse”:  http://itunes.apple.com/gb/artist/sirpaul/id17407810

“…it’s about how there are so many parallels between learning how to ride a horse and falling in love.  Both require patience.  Both require faith.  Both are big, strong and intimidating.  They both seduce you to overcome your fears, let go and ride.”

The artist says that the portrait on the cover of his album was inspired by a poem by Lord Byron called Mazeppa, which was itself inspired by a colorful legend.  It tells the tale of a young page who has a love affair with a married Countess….when her husband finds out, he ties his wife’s lover naked to a wild horse and then sets the horse free.

The poem is quite lengthy, so if you want to read it, follow the link above, but here is stanza IX (of XIX):

“‘Bring forth the horse!” – the horse was brought;
In truth, he was a noble steed,
A Tartar of the Ukraine breed,
Who looked as though the speed of thought
Were in his limbs; but he was wild,
Wild as the wild deer, and untaught,
With spur and bridle undefiled –
‘Twas but a day he had been caught;
And snorting, with erected mane,
And struggling fiercely, but in vain,
In the full foam of wrath and dread
To me the desert-born was led:
They bound me on, that menial throng,
Upon his back with many a thong;
They loosed him with a sudden lash –
Away! – away! – and on we dash! –
Torrents less rapid and less rash.”

Artist Theodore Gericault (1791-1824) was also inspired by the legend of Mazeppa.  Below is his pencil and brown wash study and his painting of the subject. 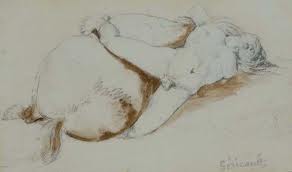 The power of these works may be attributed in part to Gericault’s own experience — he suffered three riding accidents, one of which is said to have led to his death at the tender age of 32, and which occurred while he was racing through Montmarte.

2 thoughts on “Sirpaul – The Horse”