There’s a lot to be said for riding in a circle, but like most wonderful things, it’s easy to overdo it.  It’s best to think of your circles like chocolate.  You can enjoy chocolate every day without making yourself sick (or fat).  But only if you don’t gorge yourself on it. 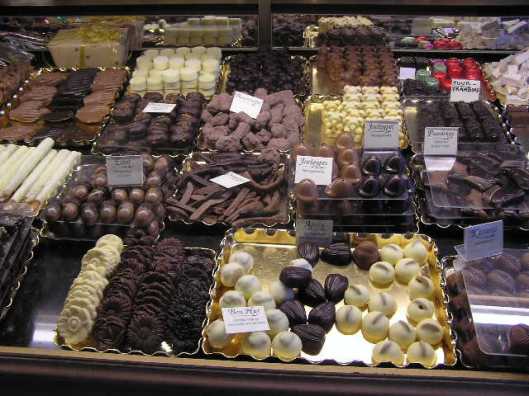 Of course, if that’s so, you don’t need to spend a lot of time on a circle.  If it’s not so and you want to make it so, you need to get off the circle or you’ll end up drilling your horse on that circle.  And we all know how successful that is in training horses.

Not to mention how incredibly boring the horses must find it.

The only reason for an obsession with circles 20 meters in size is the size of a regulation dressage ring and the movements required on the tests.  If you spend a lot of time on that 20 meter circle, maybe you’ll tell me how many different things you can do on that 20 meter circle — like transitions between and inside the different gaits.  I say fine but you can do that anywhere.  And you should.

That’s not to say you shouldn’t master that 20 meter circle — or use it to train transitions, to leg yield out to canter, to spiral in and spiral out, to get your horse on that outside rein, to engage his hind leg and to give him the appearance of bending throughout his body.

Easy as pie – that’s what we want.

Like many things with horses, the best way to do that is to do something different.  So I suggest that you ride circles of different dimensions — preferably smaller — at least as often as you ride that 20 meter circle, which will then become a breeze.  It’s similar to schooling in a field of gently rolling hills.  If you can maintain balance and rhythm there, riding in a flat arena is easy as pie.  Try some 10 meter circles and you’ll find the 20 meter circles easier.  Just don’t live there (either place).  Instead, visit from time to time.

Remember that every corner of a ring is part of a circle.  So is a half volte. So are most of your changes of direction.  You can think of them as parts of a circle.  And you should.  It will help you perfect their geometry and the geometry of that perfectly precise circle you want. 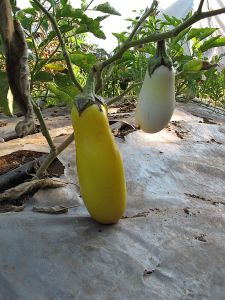 Of course, you want to be able to ride a perfectly precise circle because it’s a test of your ability to put your horse’s feet precisely where you want them. But what if you want to put your horse’s feet somewhere else?  On a figure that more closely resembles a potato?  Or a squash?  Or an eggplant?  There’s nothing wrong with incorporating a variety of vegetables into your riding, any more than there is on your breakfast table.  Unusual for both, I know, but much healthier for you.

It’s hard to get any figure right because it’s hard to keep your horse between your hands and legs.  If you spend a lot of your time riding on the rail, it’s likely to be even harder.  Because riding on the rail gives you the illusion that your horse is between your hands and legs when he’s not.  He’s probably using the rail as a crutch and so are you.  And there’s no way to test it unless you get off the rail.  So go ahead and get off the rail as much as you can.  The more time you spend riding off the rail, the more accurate all your figures will be, including the circle.

Here are my hints for riding an accurate circle:

1.  Think about tracing the outline of the circle with your horse’s hind legs.  Ride the hind legs and think less about the front legs.  As you learn to put the hind legs where you want them, the rest of the body will tend to fall into place.  You’ll still need to guide with your reins, but remember — the engine is in the rear.

Zorba the Geek’s photograph demonstrates the problem of perspective as it pertains to the circle.

2.  Adjust your eye so you can see what the circle looks like from atop your horse.  I think this is one of the biggest problems that people have.  Because of perspective, a circle just doesn’t look like a circle when you’re looking at it on top of your horse.  While you’re riding, the opposite side of the circle will look different than it will when you get there.  Put down some cones.  Draw a line in the sand or sprinkle some sawdust.  Put some lime down on your grass ring. Soon, you’ll have a better idea how that circle looks when you’re riding it.

Turn it on its side — see why riding the diamond inside the circle doesn’t work?

4.  Look where you’re going.  Right between your horse’s ears.  Your horse’s ears should also be tracing the arc of that circle, but let them follow your eyes rather than positioning your horse’s head first and then deciding where to focus your eyes.

Dressage riders tend to have a problem with this, because they would rather look at their horse’s manes than where they’re going.

Hunter/jumper riders have been taught to look inside the circle, which makes it harder for the horse to figure out where it’s supposed to go.  The horse wants to follow your eyes and if you’re looking at the center of the circle, your horse will want to go there.  You can keep him out with enough inside leg, but why give the mixed messages to begin with?  If you need to make a tight turn at speed, that’s something else, and you’ll want to look at that jump you need to make, but let’s hope your 20 meter circle isn’t a tight turn at speed…

5.  If you’re schooling inside a ring and the perimeter of your circle touches the rail (or the wall), only one of your horse’s steps will be on that rail (or along the wall).  Only one.  If you’re lucky enough to have a 20 meter ring in which to school, you can use three points to check the accuracy of your circle — two on the long side and one on the short side.  Each point will mark a single quadrant of your circle.  Make sure that your horse takes only one step along each of those points on the rail.

I have a sixth hint, but it seems to work for me better than it works for anyone else.  When I suggest it to my students, I tend to get bewildering looks and most of them tell me it doesn’t work for them.  So I won’t put it on the numbered hint list, but I’ll share it with you in the hopes that it might help someone aside from me — maybe you?

It involves visualization, so it’s rather silly, and it’s an exception to the rule for me.  I imagine a very large orange (it could be a grapefruit, which would be closer in size to what I want, but for some reason, to me, it’s an orange). This is a VERY large orange. 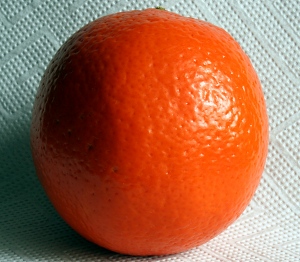 My orange feels much bigger to me than this

My orange is taller than my horse.  It’s sitting in the ring (it does not roll). The widest part of its circumference — it’s equator, we might call it — is level with my calf.  I imagine myself riding along the circumference of that orange-on-alien-steroids, with my inside calf just grazing the surface along its widest point. I’m not sure why this image works for me but it does.  Maybe it’s because it’s something very round and very large, so I can’t help but think about very round and large.  Kind of like a good 20 meter circle.

4 thoughts on “How to ride a circle”