Anyone who has been wounded — physically, emotionally, spiritually — and has been lucky enough to be around a horse, knows that horses are healers.

I’ve been spending a lot of time at the VA (the Department of Veterans Affairs) recently with my YIHB (for those new to the blog, that’s Yankee-Irish Horsewhispering Boyfriend).  He served in Vietnam and still bears the scars. I’m grateful that, at least so far, he hasn’t gotten one of the diseases that, finally, are considered presumptive for Agent Orange exposure, even though he spent time in a helicopter that sprayed it.

On one of our many recent visits to the VA, I picked up a copy of the After Action Report, produced by the Wounded Warrior Project.  One of the stories inside is entitled “Riding My Way Back.”

That’s when I met Aaron (the warrior) and Fred (the horse) and learned about the documentary that has been made about them.  Here’s a still of the two of them together: 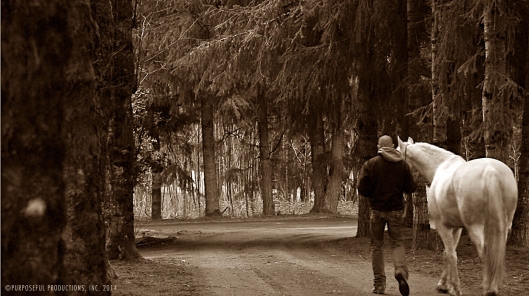 Aaron met Fred at a therapeutic riding barn and it’s not a stretch to say that the horse saved his life.  He says, “I’d lost trust in people, especially my leaders. Learning to trust Fred, I began to trust people again.”

I missed the screenings of this award-winning 30-minute documentary last November, but it’s available on DVD for home use through ridingmywayback.com, and you can contact the producers about hosting a screening.

I applaud Aaron for finding the strength to try one more time when hope was gone, and to Fred for being there.  And of course to everyone who worked on telling Aaron and Fred’s story.

Next time the opportunity presents itself, don’t forget to thank a warrior and to thank a horse.  Even if, like mine, he could never do what Fred does.