Yesterday, in my discussion of stoics, I mentioned that my Yankee-Irish horsewhispering boyfriend (YIHB) had gotten bad news about his knee.  As Christmas decorations are already at the grocery store, I can share with you that visions of pins and overnight stays in the hospital and long, painful recoveries danced in my head: 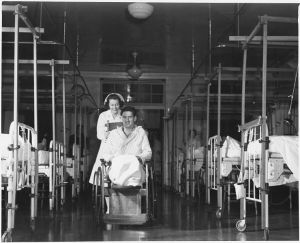 Good news.  It turns out that knees — even with the assemblage of problems that my YIHB’s knees have — can be relatively easy to fix, and take considerably less time to recover, with less pain, than rotator cuffs (which was last spring’s injury).

My YIHB’s orthopedic surgeon told him he can look forward to 45 minutes of surgery, a day or two of pain meds, a few weeks of physical therapy, and a return to normal American daily life, in a few more weeks.  Then he added, “but that’s not if you work on a farm.”

That will take a little longer.  Months, which equals most of the winter.  Which won’t be easy for my YIHB or for me.  For him, because he’ll want to do everything that he can’t do and worry about me while I’m doing it, and me because I’ll have to do it and keep him from trying to do it.

The timing of the surgery isn’t critical, and I think that knowing that is a mixed blessing.  My YIHB has a long and unreasonable list of what he wants to accomplish before the big day.  He hasn’t made his appointment yet.  I’m campaigning for a week from Tuesday (Tuesday is knee day at the practice), but my campaigns are usually as successful as the Green Party’s.

Speaking of green, that’s still the color of the grass less than a week away from Thanksgiving.  That grass is still being eaten.  Maybe we’ll be lucky and have a mild winter.  Maybe not.

It doesn’t really matter.  Because whatever happens, we’ll keep on keeping on.

4 thoughts on “Keep on keeping on”